When gasoline and diesel prices spike, we often want to blame someone for our pain at the pump. The reality is that the oil industry is a complex market. Though there are numerous factors that could ultimately influence the price of fuel, such as weather, government policies, and international relations, there are four factors that have the most significant influence. These factors include the cost of crude oil, refining costs and profits, distribution and marketing costs, and fuel taxes. Alternative fuels, such as natural gas, propane, electricity, and biofuels, can mitigate some price fluctuations attributable to short-term events, like natural disasters, because they diversify the fuel supply; however, some alternative fuel prices are also dependent on similar factors.

In May 2015, the average retail price of regular grade gasoline was $2.72, according to the Energy Information Administration (EIA). Below is a summary of the factors that affect gasoline prices, and the relative percentage of each component. We have also described how each of these factors may affect alternative fuel prices. 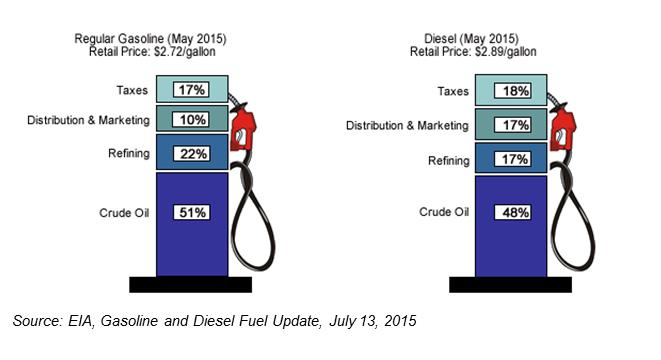 As of May, approximately 51% of the cost of gasoline was related to the price of crude oil. The fluctuation in crude oil price is the biggest factor in the volatility of the price of gasoline, as the other costs (described blow) are relatively static.

Crude oil prices are largely a product of supply and demand. Global demand has grown in recent years due to world economic growth and increased access to vehicles, particularly in developing nations. The Organization of Petroleum Exporting Countries (OPEC), which produced about 40% of the world’s crude oil between 2000 and 2014, also has significant influence on oil prices by setting production limits among members. Part of the reason oil prices have declined significantly since July 2014 is that OPEC nations are not limiting production, resulting in a global ‘glut’ of crude oil. Much of this glut stems from a surge in oil production in the United States and Canada over the last few years from unconventional sources, like shale. This price could change dramatically, however, if there is a major global supply disruption.

With the exception of electricity and natural gas, alternative fuel prices can also be impacted by the price of crude oil and the price and demand for petroleum products. Higher or lower demand for gasoline also influences ethanol demand, for example, and ethanol is closely linked to the price of gasoline, as shown in the Clean Cities Alternative Fuel Price Report. Biodiesel wholesale costs are largely influenced by the price of diesel. Propane costs historically tend to follow crude oil prices, though not to the same extent as other fuels, and change seasonally because of the demand for propane as heating fuel in the winter.

Alternative fuel prices are also affected by the applicable commodity price, though the impact varies by fuel. For example, the price of natural gas only comprises 20% of the compressed natural gas (CNG) price at the pump, according to the American Gas Association (AGA). Because the natural gas is a relatively small percentage of the overall fuel price, a swing in the natural gas commodity prices has less of an effect on the CNG price at the pump. In addition, natural gas costs are typically regulated and less expensive than petroleum (on a gasoline gallon equivalent, or GGE, basis) and the infrastructure is independent of oil infrastructure.

Crude oil must be refined into gasoline and diesel so it is compatible with our vehicles. Refining oil takes energy and costs may vary based on the type and origin of the crude oil used in the process. In May, refinery costs and profits represented about 22% of the cost of a gallon of gasoline.

Alternative fuels, such as propane, natural gas, and biofuels, are also “refined” or otherwise altered before they can be used in vehicles. Propane is a by-product of crude oil refining and is also produced as a liquid from natural gas and oil wells. Propane from natural gas liquids does not require refining; however, it must go through a scrubbing process to remove contaminants, as well as a separation process. Natural gas is produced from natural gas and oil wells, and is also subject to a separation and treatment process to remove contaminants. It must also be compressed in order to be transported in major distribution pipelines. Biofuel production facilities are often called ‘biorefineries’ because they produce and refine crude biofuels at the same location.

Since many of us do not live next to oil refineries, gasoline and diesel must be transported to local fueling stations first through a sophisticated system of pipelines, trucks, or barges to a network of fuel terminals, which can also be referred to as a distribution rack. The distributors, also called jobbers, load and blend the gasoline and diesel with other products (e.g., ethanol, biodiesel) in tanker trucks, which is driven to your local retail outlets and placed in underground storage tanks. In every part of the supply chain there are costs associated with employee salaries and benefits, equipment, taxes, insurance, and other types of overhead. In May, these resulting costs equaled about 10% of the price of a gallon of gasoline.

Finally, motor fuel taxes contribute to the construction and maintenance of the roads we use on a regular basis. In the early 1900s, state governments devised ways to collect taxes on each gallon of fuel to help cover these costs and increase revenue. In May, federal, state, and local taxes accounted for 17% of the average retail price of a gallon of gasoline. Federal excise taxes are currently $0.184 per gallon of gasoline or ethanol and $0.244 per gallon of diesel or biodiesel. Propane and CNG are taxed at $0.183 per gallon of propane or GGE of CNG, and liquefied natural gas is taxed at $0.243 per gallon. The September Question of the Month will delve into this topic in more detail.

State and local fuel taxes vary widely by jurisdiction. Though motor fuel taxes are applied to each gallon of gasoline or diesel sold, alternative fuels can also be taxed on an energy equivalent basis with gasoline and/or diesel. Some states use alternatives to traditional state fuel taxes, such as annual fees for alternative fuel vehicles or taxes based on the number of miles traveled. Look for the August Question of the Month for more information on these alternatives.

Though the alternative fuel supply chain differs slightly from conventional fuels, many of the same factors influencing oil prices also impact alternative fuels. Now when you fill up your vehicle, take a moment to think about all the infrastructure and people required to process and deliver fuel from the field to the pump.

For more information on fuel prices, please refer to the following websites:

Do you have a question about alternative fuels and advanced vehicle technologies? Contact  the Clean Cities Technical Response Service Team at technicalresponse@icfi.com or 1-800-254-6735.